Sometime in 1943, the Allies launch an attack against the Neuroi in Europe. Initially, the attack goes well but when a large flying type Neuroi appears over the battlefield, it decimates all the Allies armor and infantry before moving on to destroy the supporting Allied fleet. The Neuroi was then later destroyed by the 501st witches.

In 1945 over Belgica's airpsace, Heidemarie W. Schnaufer is finishing her night patrol, happy the night went smoothly. While being contacted from St. Trond's base by Minna to see how she's doing, the connection suddenly becomes unstable and she can no longer hear Minna's words. Immediately following, Heidemarie realizes a Neuroi is nearby and prepares to fight it, wondering how she didn't notice until it was directly beneath her. The moment she locks on and is ready to fire, the Neuroi undergoes a change in form and dips back into the clouds. Then it reappears behind her and outmaneuvers her attempt to get behind it, but after an intense fight, she finally manages to get it to fly straight up, then exposes the core as she descends. It fires off two final beams but misses, and the Night Witch destroys it immediately. Minna finally reestablishes contact and upon hearing of the fight, orders Heidemarie to return to base and give her a full report.

Back in Yokosuka in the Fuso Empire, Micchan is in the forest looking for her best friend, and suddenly runs into a bear which Yoshika is riding on the back of. Much to her surprise, Yoshika tells her to get on the back of the bear, which they ride back to his mother. After learning this was the bear cub Yoshika saved earlier in spring, and Yoshika confessing because of the war her medical studies are really not turning out well, they hear a puppy barking for help in the river, stranded on a rock in the middle. Yoshika bravely leaps across more rocks to get to the puppy, but loses her footing when she tries to get back to the other side and falls in. She tries to swim to safety, but ends up falling off a waterfall. A witch suddenly descends from the sky, catches Yoshika, and takes her and the puppy back to safety. As soon as the witch realizes the girl she just saved is Yoshika, she suddenly becomes very excited and introduces herself as Hattori Shizuka, declares how much she idolizes Yoshika (thanks to stories told to her by Mio), and explains that she, in fact, was looking for Yoshika to bring her to Europe to study as a doctor.? Back at Yoshika's home, Shizuka explains that the Helvetian Medical School wanted to invite Yoshika as soon as they heard she was studying medicine. As it is regarded as one of the best medical schools, Yoshika decides to go after all, promising she will become the best doctor she can be.

The next day, Yoshika and Shizuka board the carrier Amagi, and as they depart, Yoshika exchanges best wishes with her family and Micchan. On the very same day in Venezia, Shirley and Lucchini are rowing a boat through a canal in Venezia, admiring how the reconstruction efforts are going, though Lucchini comments that they ought to fix the bell tower quickly as it is a town symbol. Lucchini then spots a regata and as soon as she tells Shirley it's a speed race, the Liberion Witch takes interest. While three of the local Romagnan Witches are in another boat, with Martina Crespi and Fernandia Malvezzi savoring victory proclaiming their partner, Luciana Mazzei, is the fastest, Shirley suddenly boldly declares herself to be the fastest as she catches up with little effort. Shirley challenges the three to a race, which Martina and Fernandia accept (much to Luciana's chagrin). At first, the Romagnan Witches seem to have the upper hand, but Shirley soon picks up the pace, and Fernandia forces Luciana to use her magic. A very angry Shirley immediately responds by activating her own and vastly outdistances them, reaching the goal in seconds but Lucchini's bragging is cut short when Shirley finds she can't stop, leaving the two unable to stop themselves from crashing into another boat and being sent flying high into the air.

As Fernandia heals a massive bump Lucchini received during the accident, the five make comments about how Yoshika could heal it much faster, with laments about how she lost her magic. Shirley in particular wonders how Yoshika is doing with concern, but no sooner has Lucchini been healed than the alarm sounds, signaling a Neuroi is on the move. Shirley, thankfully, had prepared her and Lucchini's Strikers in case such a thing happened, and the two take to the skies, though they realize they cannot use their radios. The Neuroi, which has the same shape as the one Heidemarie battled, engages them as they try to keep it away from the city, but just when Lucchini thinks she has a sure kill, the Neuroi teleports and transforms, racing headlong back at the city. Martina, Luciana and Fernandia come up with a plan to use their shield while Shirley races by to force the Neuroi up into the air, giving Lucchini an opening to kill it with impunity. The members of the 504th celebrate, but Lucchini and Shirley are left confused and worried from the sudden appearance of the Neuroi.

Back on board the Amagi, Shizuka is looking through a photo album detailing some of Yoshika's achievements and a picture she took of herself and Yoshika, thinking about how lucky she was to accompany her idol to Europe. At that moment, Yoshika reenters, making Shizuka have to put away the album quickly. When Yoshika finds out Shizuka's age, she is surprised because the latter was acting much more mature than her. She asks Shizuka to stop referring to her as "Pilot Officer Miyafuji," explaining that Mio told her once they are both in the navy, they don't need to worry so much about rank. Struggling for whatever reason to refer to her as "Miyafuji-san," Shizuka gets very surprised about how much-or rather how little-Yoshika is taking on the trip and reminds her that she is studying as a Pilot Officer, and needs to dress accordingly (which, humorously, Yoshika never did on-screen). The next day, Shizuka finds Yoshika helped the crew cook and clean the deck. Shizuka states to Yoshika that these behaviors do not befit Yoshika's rank. While Shizuka is explaining this, Yoshika notes this is how Erica feels when Gertrud is lecturing her.

Near Cape Town, the carrier strikes an iceberg and a fire starts near the ammunition storage. With the automatic extinguishers malfunctioning and the fire spreading, Chief Warrant Officer Yuuki who is trapped in the damage area, orders the compartment he is in to be flooded. Yoshika disobeys orders and rushed in and with Yuuki manages to restore the extinguishers. The Amagi reaches the Pas-de-Calais and Perrine and Lynette arrive to greet Yoshika and Shizuka. The four witches proceed to go to Perrine's estate where they stay for the night. While staying Perrine explains to Shizuka on how Yoshika had made an impact on the 501st. The next day, Yoshika and Shizuka set off for Dijon, before they leave Lynette give Yoshika a white robe as a present.

In Orussia, Eila and Sanya say goodbye to Sasha and Nippa as the two former 501st witches take off. However, as the two witches fly, they encounter a Neuroi in the fog. Back in Gallia, Yohsika and Shizuka are approached by a villager who requests assistance as his village was the victim of landslide. Despite Shizuka's protests that the village is near the border and was to be avoided for fear of the Neuroi, Yoshika convinces her they need to help and the two spend the rest of the day providing aid for wounded villagers. The two stay in the village though Shizuka notes that she cannot contact anyone over the radio.

At St. Trond in Belgica, Minna receives a call for Shirley reporting the Neuroi over Venezia. Along with Heidemarie, they plot out all the Neuroi engaged recently and notice that they are too far from any of the hives and that something is amiss. Minna orders Gertrud and Erica to patrol the border to check and engaged several Neuroi and witness a tower-shaped Neuroi cross the Rhine River. The two witches race back to report their findings as the radios are jammed. While retreating, the two witches encounter another Neuroi but are out of magic and weapons though Erica still managed to destroy it with her Strum ability until Minna arrives to check on them.

The Neuori are then seem attacking the village Yoshika and Shizuka and help with getting the villagers to safety. In the process, Shizuka is shot down as another tower Neuroi appears. All along the Gallian front, the Neuroi rise from the ground and launch a massive attack that catches the Allies off guard as various soldiers and witches are seen trying to hold the line. Meanwhile, Yohsika takes on a tower Neuroi and manages to take it out though is severely wounded in the process. The Neuroi then reveal a massive Neuroi carrier and Shizuka takes off in order to get clear of the jamming to call for assistance as the 501st witches converge in and responding. Hearing her comrades calling her, Yoshika manages to regain her magic. The 501st along with Mio who brought along the battleship Yamato modified with floaters so it can transit the Rhine. The force begins engaging the Neuroi as Mio delivers Yoshika a Shinden Striker Unit so she can join the fight. The 501st and with the Yamato engage the Neuroi carrier and succeed in destroying it. Heidemaire reports that more Neuroi may have appeared on the Karlsland border and Minna announces that the 501st is being reformed as everyone flies off into the horizon.

I mean, she's not wrong 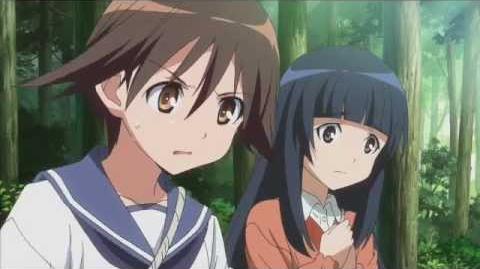