Strike Witches Zero:1937 Fuso Sea Incident (ストライクウィッチーズ零 1937 扶桑海事変, Sutoraiku Witchīzu Rei: 1937 Fusou Kaijihen) is a manga series that was released in Nyantype magazine from October 2010 to November 2011. It has been officially translated in English by Seven Seas Entertainment and also released in Kindle digital books both in Japanese and English. It is often referred to as Flash in the Fuso Sea, but the official title is Strike Witches Zero:1937 Fuso Sea Incident.

The story follows Sakamoto Mio, Takei Junko and Wakamoto Tetsuko as they receive training to become Witches from Kitagou Fumika. This manga includes the stories of how Mio learned to control her Magic Eye, how Junko took the first steps to find her true path, and the development of new and more powerful Striker Units to combat the Neuroi.

The plot later shifts to the Fuso Sea Incident as the story progresses. The discovery that the Neuroi have a vulnerable core gave hope to soldiers and citizens alike, but there is no clear plan to push back the Neuroi. In the meantime, a new threat emerges when a giant "mountain" Neuroi begins to cross the Fuso Sea, threatening the heart of the empire itself. Forced into a stalemate and grinding war of attrition, the Witches develop a desperate plan that hinges on two things: the cooperation of the Fuso Imperial Navy, and Mio Sakamoto's Magic Eye.

Poster of in-universe movie Flash in the Fuso Sea 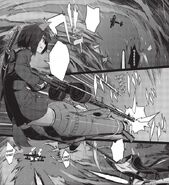 Toshiko punching a Vice Admiral in the face.
Add a photo to this gallery
Retrieved from "https://worldwitches.fandom.com/wiki/Strike_Witches_Zero:1937_Fuso_Sea_Incident?oldid=25158"
Community content is available under CC-BY-SA unless otherwise noted.