There have been a number of references to the first season in the second season, in terms of themes, in-jokes and even repeated scenes. but sometimes, scenes such as the opening of episode 7 are so similar that they may be initially confused for material from the other season. Which episode 7? Who can say? 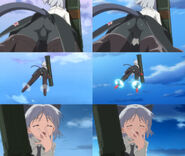 Sanya returns to base after a long night on patrol, in episode 07.
Add a photo to this gallery
Retrieved from "https://worldwitches.fandom.com/wiki/Suspiciously_Similar_Scenes?oldid=25719"
Community content is available under CC-BY-SA unless otherwise noted.