Suwa Goshiki (諏訪 五色) is a Witch from Fuso, attached with the Fuso Imperial Army. She is the little sister of Suwa Masuzu and Suwa Amaki. However, they are not related by blood. Her familiar first made its debut in Sōkū no Otome-tachi, with its appearance being that of a fox but further details on breed are currently unknown.

Compared to her natural airhead sister, Amaki, Goshiki is by far more level-headed in regards to daily life.

During the events of Tenkū no Otome-tachi, starting with Chapter 7, Goshiki is transferred to the 504th Joint Fighter Wing along with Nakajima Hayate. However, Goshiki and Hayate stow away on board a vessel bound for the 501st Joint Fighter Wing in order to visit Miyafuji Yoshika first. They are briefly detained by members of the 501st while visiting Yoshika before being picked up by Takei Junko and taken to their new assignment in Romagna. It should be noted that these series of events are no longer considered canon, due to the retconning of Tenkū no Otome-tachi. 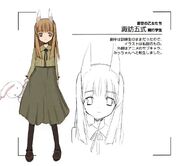 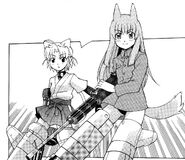 Add a photo to this gallery
Retrieved from "https://worldwitches.fandom.com/wiki/Suwa_Goshiki?oldid=25392"
Community content is available under CC-BY-SA unless otherwise noted.