I bring this up because, according to the Doujian, her familar is (well, was) a Chicken. And yes, I have proof of this, as it appears in this section (warning though, language), 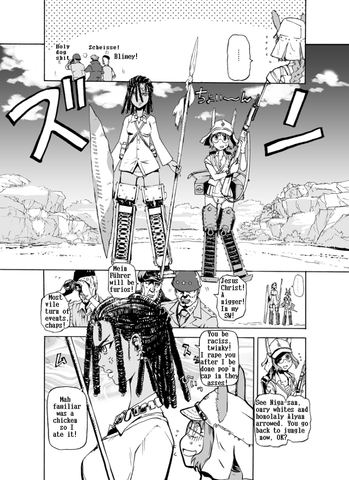 RE:......You are joking, right? This is obviously not the original Witch of the Sphinx page. And Humikane's website clearly states that Matilda is uses "different form of magic as it does not require familiar to use magical abilities".

Well, so be it then. I found this within my archive of SW photos, and found it of intreset. Course I did need to prove it, so now I know it's false. Thank you for the information then. (Zoids Fanatic 04:10, November 17, 2011 (UTC))

Information from Kei's report confirm that Matilda operates a variant of the the Panzer III and for matching armament in question is a 3.7cm KwK36 designed witch combat gun, although complete translation for Matilda's Muster information is required to identify and confirm both the specific variant of the Panzer III as well as how much magic mass is outputted by the 3.7cm KwK36 respectively, as well as adding any other information that is translated and found in her Muster information found in Kei's report.

What's more in her Muster information her recorded info pretaining to her affiliation is confirmed as being the 31st Joint Fighter Squadron and to Africa both prior and in general. Exact details as to when she origonated is not yet known. Other parts of information on her will require translation.

Retrieved from "https://worldwitches.fandom.com/wiki/Talk:Matilda?oldid=15894"
Community content is available under CC-BY-SA unless otherwise noted.