Back to page
View source

someone figure this one out please. I am confus.

I'm asking what is this for? lol

it is for those moments in life when you can only be saved by a heavy dose of perfect cuteness. --Snugglemuffins (SW talk) (SG talk) irc.rizon.net#aliveandwell 09:17, October 30, 2010 (UTC)

Other Witches don't have a gallery because nobody has made one for them.

Also, Mio and Ursula had a gallery of their own before Perrine did.

If you feel the burning need to make more gallerys, go for it! Just remember that we try to keep fanart out of this wiki.

What about "Official" artwork?

Humikane's work is good to go, and official releases. The bodypillow cases are fine as well. just make sure it doesn't look like crap. specifically, like half the nyantype posters --Snugglemuffins (SW talk) (SG talk) irc.rizon.net#aliveandwell 08:56, November 2, 2010 (UTC)

in addition to the guidelines above, don't use the gallery option unless its going to be a maximum of 6 pictures. any more than that, use a slideshow. takes up less space. for one thing, the Gallery was put in when we were allowed to have more than 3 pictures per line. Slideshows can be up to 625 pixels wide. --Snugglemuffins (SW talk) (SG talk) irc.rizon.net#aliveandwell 10:51, November 2, 2010 (UTC)

we might not need that number of photos, but screen shots are still a legitimate inclusion in a gallery. maybe not all of them, but certainly enough of them that we can't just delete them wholesale.

Then could you not have teased out a few of the less needed images before dumping the rest back into the slideshow?

that's better, right? i got rid of most of the dumber ones at least. i still need to shuffle them around a bit though.

It's still too much. Do you really need seven pictures from that sauna scene of which five look like this: 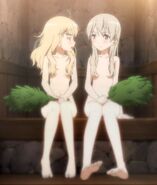 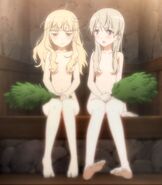 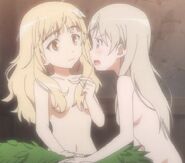 I agree with Nipa there. I mean, I want to read about Perrine, not slam my head against a hard surface and watch my love of this fandom slowly die. I mean, really, it's annoying beyond all belief. Sure, the image of the hugging pillow (creepy as is) is fine and all, but do we really need to see her half-naked that much? I mean, we're critized for anything that's "bad", but here is Perrine's article, pushing it.

Doesn't Perrine fly an Arsenal VG39bis during the second season of Strike Witches?

I wonder if she'll write her own The Big Show, have a political career, and became the pro fisherwoman..?

its not confirmed if in the strike witches universe she was born in amazonas, i think its better if you delete that part since its confusing and we dont have permission to edit it

she was acually born in Pas-de-Calais, Gallia