Ursula Hartmann (ウルスラ・ハルトマン) is a Witch of the 507th Joint Fighter Wing, originating from Karlsland.

She is the twin sister of Erica Hartmann. She had the same witch qualities as her older sister, but she couldn't enter military school because she wouldn't listen to her superiors.

She was accepted as a non-commissioned officer and, after training, was sent to Suomus in a volunteer army. After that, she became a member of the Independent Squadron known as The Misfits Squadron, later promoted to 507th Joint Fighter Wing. In this squadron, she learned how to communicate and fight with others and gradually escaped from the nature of relying solely on books.

Ursula hobby is experimenting. While in the Independent Squadron, she developed her own air-to-air rocket and achieved results against large Neuroi. She later evolved it into Fliegerhammer prototype, which was used by Flying Officer Litvyak. This achievement was recognized by the Karlsland Ministry of Technology and she was later involved in weapons development.

After transferring to the Ministry of Technology of her home country, she spent her nights at the Institute of Technology and worked on the development and operation of new weapons, mainly rocket weapons. She visited the 501st JFW base in Britannia to test the new Fliegerhammer with Sanya. They had been in contact before the visit.

Utilizing her abilities as a witch, she is also cooperating in the development of new Striker Units, and uses a wide range of equipment. She is involved in the development of the jet striker Messerscharf Me262. She visited the 501st base in Romagna to retrieve the wrecked test unit used by Captain Barkhorn.

Ursula is serious and eager to study, but she is silent and does not open her mouth more than necessary. However if something of interest happen, she can suddenly become talkative.

The character of "don't listen to others" is glimpsed by her sister Erica, but is particularly remarkable in Ursula.

She was often compared with her excellent sister, and thought that it was annoying. However, as she became more confident with her friends on the Suomus Front and started to achieve results, she grew out of it.

Unlike her sister who act in her own way, knowledge based on books takes precedence over everything for Ursula, and the norm is to move as per the manual. However, her body is not able to keep up with her head, so she is unable to move as expected, especially when shooting. 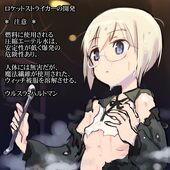 Ursula gets an offer she can't refuse

Ursula is introduced to the 501st

Ursula during the early days of the Misfits Squadron