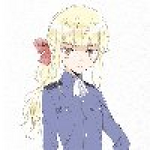 236 Edits since joining this wiki
June 11, 2011
0 Discussion posts
My Strike Witches prequel story: "Where From the Warlock?" (Bader, Clostermann, Barkhorn, Schnaufer and others.)

Favorite witch: Donna Bader. (See my story for why it's 'Donna,' and not 'Delores.')

Next Favorite: Heidemarie W. Schnaufer, Perrine H. Clostermann, and by her association with Perrine; Amelie Planchard.

Rank: Major. (At the time of her disappearance.)

History: Volunteered to go help China fight incursions by the Nueroi. After several victories against the Nueroi and continued run-ins with the LVG's commander, she left and made her way back to Liberion. Reinstated in the Marines, she moved through several units, gaining a reputation as a bit of a carouser and a trouble-maker. Finally, nearing the age where most witches were forcibly retired by the loss of their magical abilities, she was given command of VMF-214. Seeking a way to get Boyington and other such Marine and Navy trouble-makers out of sight, and out of mind, the high-command of the Liberion Navy sent VMF-214, appropriately named; 'The Black Sheep,' to a remote base on Guadacanal in the South-West Pacific. There they remained, far from the thoughts of their leaders, until the Nueroi unexpectedly made attempt to cut the lines of supply between Liberion and points further west by sending a large invasion force to the Britannian Possession of Rabaul. Many fierce battles ensued. Under Boyington's leadership, the Black Sheep slowly gained the upper hand against their Nueroi enemies. During the final battle to eliminate the last of the Nueroi force holding Rabaul, Boyington disappeared without a trace. Following an extensive search, it was decided Boyington had gone down in the Solomon Sea. Though no proof exists to confirm such, several Black Sheep witches claim they saw Boyington being carried away by the Nueroi.

(Witch from the Strike Witches fiction I wrote.)

Name: Donna Bader (Different than the one listed with the other Britannian witches.)

History: Served in Ostmark, where she was wounded by the Neuroi when that country was over-run. Participated in Operation Dynamo before transfering to Training Command and being placed in charge of Operational Training Unit 56. Commanded that unit during the Battle of Britannia. OTU-56 would become the unit chosen to test the Joint Fighter Wing concept. Several Karlslanders, Gallians, and a single Liberion, many of whom would go on to have important careers as military witches, served in OTU-56 and under Donna's command.

Donna Bader would lead OTU-56 into battle during its only combat action as a unit. When the Neuroi initiated an attempt to emplace a Hive Core over Coventry, Britannia, OTU-56 would be the only unit able to mave against the attempt. OTU-56 sufferered nearly 100% casualties, wounded and killed, but the Hive Core was stopped, and Britannia save as a future base against the Neuroi occupation of Europe.

Donna would later go on to command the 11th Joint Fighter Squadron, responsible for the defence of London and its environs.

Retrieved from "https://worldwitches.fandom.com/wiki/User:Makuhari_Fan01?oldid=13176"
Community content is available under CC-BY-SA unless otherwise noted.