The Yamato was a battleship in the Fuso Imperial Navy. It is based on the real ship of the same name.

The Yamato was first seen in the Fuso Harbor after Yoshika and Micchan's graduation.

Several weeks later, Fuso sent a fleet to Romagna to aid in the destruction of the Neuroi Hive above said country. The Yamato served as its flagship, and also was carrying the experimental J7W "Shinden" Striker Unit. An accident occurred in the engine room of the Yamato en route to Romagna, and Yoshika, along with Lynette Bishop, was sent to help the injured workers. At this point, a massive Neuroi attacked, and even the Yamato's cannons could not defeat it. Lynne attempted to hold off the Neuroi, giving the fleet time to escape, and nearly got herself killed, but Yoshika used the Shinden on board the Yamato to save her friend.

The final episodes revealed the Yamato was equipped with a magic generator that would temporarily turn it into a Neuroi (an idea which Minna and Mio abhored) for the sake of defeating the Super Hive over Venezia. The Witches defended the battleship long enough for it to make the conversion, giving the Yamato flight, Neuroi armor, beams, and a high power increase of the main cannon. However, the generator stopped working shortly after it reached the Hive, forcing Mio to fly the battleship and power it with her own magic to fire the main cannon. Even then, it only destroyed the outer layer, while the Yamato was stuck partially inside the core of the Super Hive, useless. After Yoshika destroyed the core using Shin Reppuzan, the Yamato was sent crashing into the sea.

During the Movie, the Yamato was recovered from the sea and given flotation devices, allowing it to aid in destroying the Neuroi Mothership during the Battle of the Bulge. Its main cannon blew a large hole in the side, giving the Witches an opportunity to attack and destroy it. 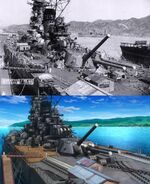